March 16, 2018 * by Dave Grossman * 3 Comments
Did you miss a deal? Never again! Apply to join the members-only MilesTalk Facebook group.

By now, everyone on Planet Earth knows what happened. On Tuesday, a United flight attendant demanded that a dog owner place her French Bulldog, which was in a dog carrier, in the overhead bin. The dog died in-flight. It’s an unthinkable tragedy, not helped by the fact that United is unquestionably the worst airline to fly with a pet. In the last three years, United almost half of all dogs that have died in-flight have been in United’s care. 41 out of 85 to be exact.

And according to this data from the DOT (page 58), United in 2017 caused the deaths of 18 animals and injury of 13 more.  American, Delta, and Alaska tied for second place at 2 pet deaths each. 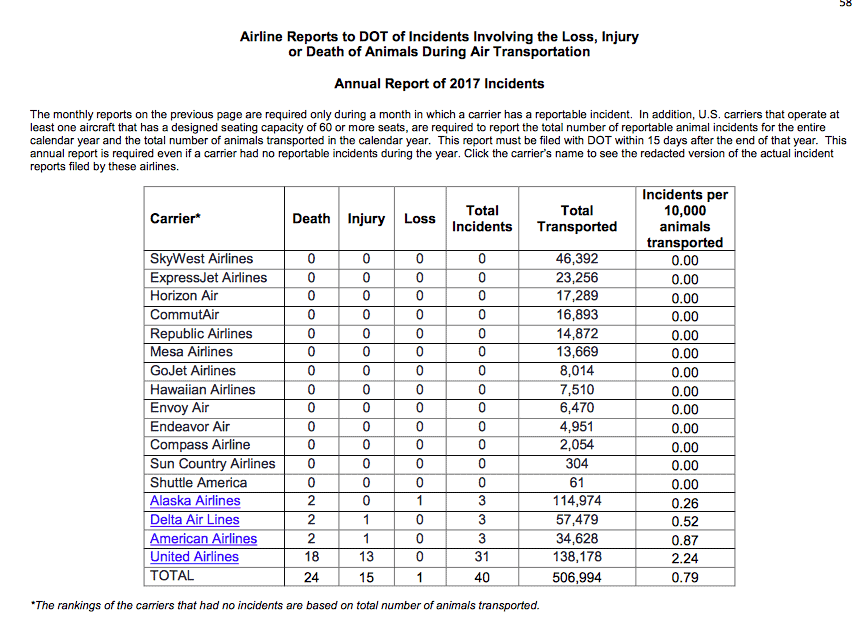 So with the facts out of the way, I’d like to opine on the discourse I have been seeing online since this happened. Many people are coming out and blaming the dog’s owner – both for allowing this to occur and for not checking on the dog in-flight. We don’t have so many of the details verified at this point. There are reports that the seatbelt sign was on the whole flight so she couldn’t get up and check. She certainly seems to have pushed back against putting the dog up there in the first place, though she acquiesced in the end, to a terrible fate. We also don’t know the exact cause of death. The overhead is not airtight as some people are writing. But the dog is a breed that has trouble breathing on a good day and panic/anxiety certainly could have caused a heart attack. (And that, of course, is just my own conjecture at this point.)

Now, I would have never complied. I’d have been kicked off the plane for not complying with crewmember instructions.

But she complied. And if you take a step back from knowing the final outcome here, it’s not hard to see why she may have felt obligated to comply.

When I refer to the “security card,” I am referring to what has happened with airline security post-9/11 and since the creation of the TSA. When it comes to you, as a customer, vs an airline, you have become patently unallowed to disagree with anyone in an airport or on a plane.

It has become the one place where the customer is always wrong. If you disagree with anything a gate attendant or flight attendant says, they have all power to have you arrested.  Simply taking a photo of the wing or speaking a foreign language can get you in trouble these days. Ben at One Mile at a Time reported yesterday on the story of one of his readers who was taken off a plane by police in Florida for being an AV Geek wanting to take pictures of his first time on a particular type of aircraft and speaking on the phone in Polish to his mother.

The issue is that people that disagree with airport staff or crew member instructions are not inherently security risks. Calling the police on a customer who disagrees with you should not be “protocol” yet somehow that has become acceptable in our society.  I’m not saying there aren’t times and places where calling the police on a belligerent customer wouldn’t be acceptable. If it is clear that the security of the plane is even possibly in danger, I’m all for it.

But here’s what is missing: culpability on the airline staff for false alarms.  If a clerk at the GAP called police because a customer trying to return an item was arguing with the clerk, the cops would laugh at them. Certainly, it could escalate, but not just for having the argument. And even if the cops came, the customer would simply be told to leave.

Depending on who you argue with at an airport or on a plane, however, you face arrest, having your ticket canceled, or, if you are really unlucky, being added to the “no-fly” list.

So many people that are armchair quarterbacking this woman’s lack of firm pushback (i.e. standing ground and not complying with unreasonable crewmember instructions) have never witnessed the “security card” because they don’t fly enough. But it’s real and I contend that many passengers would have also complied – because we have been instructed that, at all costs, airline personnel are right and we, as passengers, are wrong – and if we dare show a backbone in saying we are NOT wrong, we are threatened with arrest (or are actually arrested!)

So what would help?

Hold airline employees as responsible for pulling the “security card” as we hold police offers accountable when they show unreasonable force. If you call the cops on a passenger and the cops can’t substantiate a real security threat, that airline employee should be disciplined.

Again, there are many times and reasons to call the police on a flyer who may be a security threat. But that reason is not that the customer disagrees with you or is an inconvenience to you.

If we can restore some equilibrium to the passenger/airline relationship, perhaps we can save a future passenger from complying with a future assinine crewmember instruction.

Share if you agree – let’s get some real change happening here.