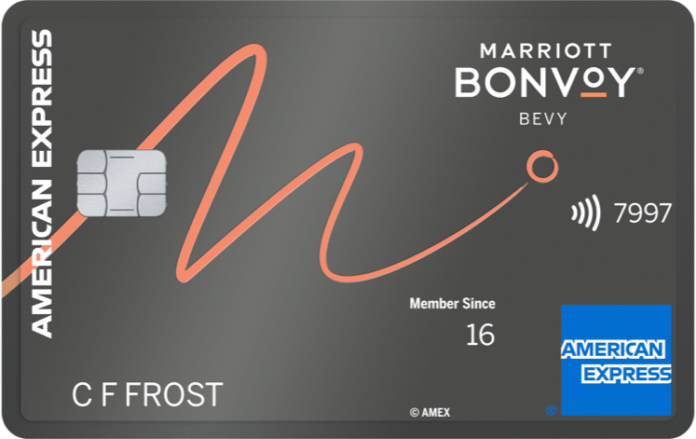 American Express currently has two other consumer Bonvoy credit cards. The Bonvoy Amex ($95 annual fee – only available by downgrade from Brilliant or Bevy and not available for direct applications) and the Marriott Bonvoy Brilliant™ American Express® Card which just raised its annual fee to $650 amid new benefits.

Quick Review of the Bonvoy Bevy

You get 4X Bonvoy Points for up to $15,000 in combined purchases per year at restaurants worldwide and at U.S. supermarkets compared to 2X on the Bonvoy Amex. Beyond that you get three more benefits: the free night award is valid for up to 50,000 points worth and you do get 1,000 Bonvoy points (worth about $5-6) with each qualifying stay (which with Marriott generally only refers to paid stays and now award nights). Finally, you get Marriott Bonvoy Gold status instead of Silver status.

That said, I would personally favor the Amex Gold Card which with the same $250 annual fee earns 4X Membership Rewards on dining and US Supermarkets. Worst case, you could transfer to Bonvoy 1:1, but since Amex points are worth 3 times that of Bonvoy points (as a general rule).

The 15 elite night credits are the same as the Bonvoy Amex.

As far as Gold status vs Silver status, I don’t think you’ll see much difference on-property. You really need to be Platinum, which the $650 Bonvoy Brilliant now confers automatically, to get meaningful upgrades, including suites, as well as lounge access and breakfast at full service properties. Gold does get 25% bonus points on paid stays vs. 10% with Silver. Technically if offers a 2pm late checkout, but it’s subject to availability which means it’s really no benefit at all as they can just say no. Once you reach Platinum, you get a guaranteed 4pm late checkout, excluding resort hotels and convention center hotels.

One odd thing to note is that the 4X on dining is actually superior to the 3X on dining the much more expensive Brilliant card gives.

If you already have 5 Amex credit cards and therefore can’t get more, the Bonvoy Bountiful card from Chase is identical in every way, although subject to 5/24.

Some will find the Marriott Bonvoy Bevy™ American Express® Card to be a nice in-between alternative between the Bonvoy Amex and the Brilliant. But for the $155 in additional annual fees, it’s not a slam dunk in my opinion. I’d personally, if I was going to spend the $250, go for the Marriott Bonvoy Brilliant™ American Express® Card where you at least get Platinum status, $300 in annual dining credits ($25 a month), and an 85,000 point free night certificate. You could easily justify that as covering the annual fee since the 85,000 point certificate should be able to land you a $400-$500 room night at minimum (or two $200 rooms, etc.) and you get the $300 in dining credits – so essentially the whole fee. Of course that assumes you will easily use the free night.