March 22, 2018 * by Dave Grossman * 1 Comment
Did you miss a deal? Never again! Apply to join the members-only MilesTalk Facebook group.

If you Google “United close-in fee trick” you will find no shortage of blogs explaining this workaround on the $75 fee that United charges non-elites / premium credit card holders to book within 21 days of travel. It’s a total junk fee – it costs United no more to let you get a ticket 21 days out than 2 days out, but when availability opens last minute, United has another way to charge you more for the same thing. American does this as well. Delta doesn’t, but they also seem to have stopped releasing excess space last minute. 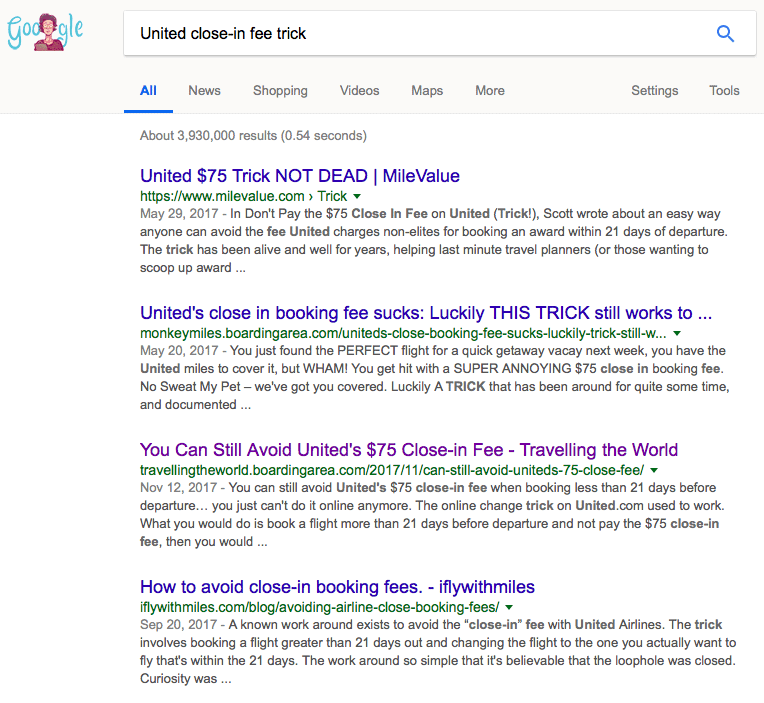 For United, specifically, the long-used workaround to this fee has been to book an award seat more than 21 days out and then change the ticket to your desired date. At first, this could be done online as United.com wouldn’t add the fee. Last year it started charging the fee and the workaround began to be a phone call as unless an agent knew they needed to charge the fee (and many/most didn’t know) it would be done at no charge.

It seems this trick may be on its last legs. When I called to do this yesterday, the first agent immediately informed me of the $75 fee to move it to the date I wanted, a mere 19 days away. I said I’d keep the flight and did a HUCA (hang up, call again) and this time the agent was baffled why the “system was adding a $75 fee” – eventually click-clacking it away. (I basically kept silent the whole time to just see how it would play out.)

While she did remove it in the end, I think the takeaway here is that the call center software is now on-par with the website and, due to the fee having to be *removed* rather than *added*, I think this one is on its last legs.

But it’s also another reminder that better than keeping a stash of United miles is keeping stashes of various transferable currencies. Had this trick not worked, I would have canceled the flight with United and transferred 12,500 Amex Membership Rewards points to Aeroplan, where I would have booked the same seat minus a close-in fee.  I also could have used 10,000 Avianca miles (transfered from Citi ThankYou) though Avianca would charge $50, or Singapore Airlines which can now book United awards online. It would have been the same 12,500 miles and $5.60 there as with Aeroplan.

When using transferable currencies, though, keep in mind transfer times. None of the above programs would have held that United seat for me. An average transfer to Avianca is frm a couple of days to as much as week from ThankYou. Singapore transfers are usually about 24 hours. Amex to Aeroplan is instant, so that is the route I’d have gone here.

Is this a trick you have used? Have a different experience? Let me know here, on Twitter, or in the private MilesTalk Facebook group.