Alaska joining the Oneworld alliance is a Really. Big. Deal.

When Will Alaska Airlines Join Oneworld?

Early in the pandemic, they’d said they were hoping to accelerate the timeline, possibly joining by the end of 2020. That won’t happen, but the March 31, 2021 date is now confirmed per Alaska Airlines.

This has been in the works since early 2020 and the original join date was going to be in late 2021, so this is sooner than we originally thought even if it’s later than we recently thought…

Historically, Alaska Airlines’ Mileage Plan program has had earn and burn relationships with a variety of different airlines despite not being in any of the big three airline alliances.

Each partner has its own award chart. Many offer screamingly good deals, like 70,000 Alaska MileagePlan miles to Asia or Australia in First Class.

Alaska also allows a stopover on a one-way award. Meaning that you could fly, for example, NYC-Tokyo, stop for a week in Japan, and continue on to anywhere in Asia for just 70,000 – 75,000 miles depending on your final destination.

Earning rates on some partners are absolutely insanely good as well. Look at how many miles you can earn from one premium class flight on BA! 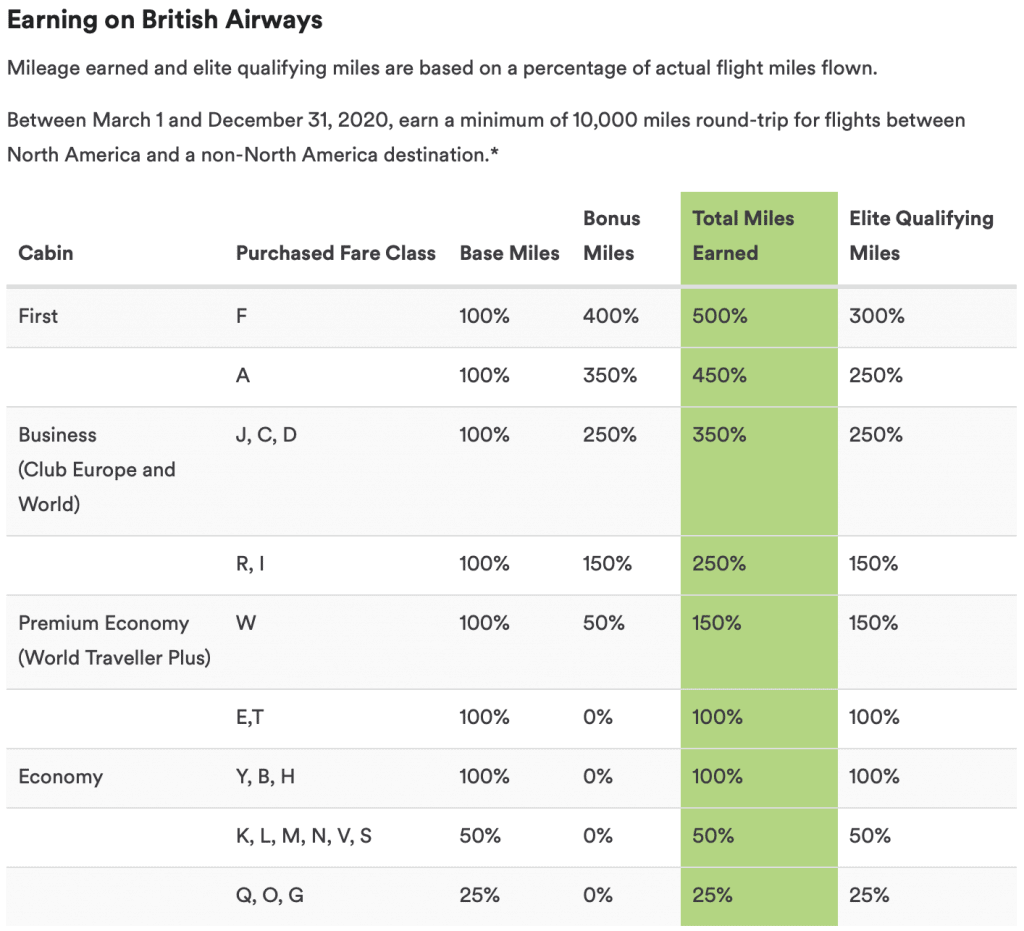 But for redeeming, there is no standard award table. The way they have it by partner is something that I’m concerned about when it comes to joining Oneworld. More on that below.

Unfortunately, earning when not flying isn’t as easy as most airlines as their credit card doesn’t have a crazy high welcome bonus, doesn’t offer more than 1 mile per dollar outside of on Alaska, and they aren’t a partner of any transferable bank point (you can transfer Marriott Bonvoy if you’d like).

Qualification allows for you to earn status with the fewest flown mileage of any North American mileage program – if your miles are all on Alaska Airlines. Starting “MVP” Tier is just 20,000 qualifying miles.

Here are the offered benefits when flying Alaska:

(Remember, as they aren’t in an alliance, there are no current reciprocal benefits with any alliance airlines.) 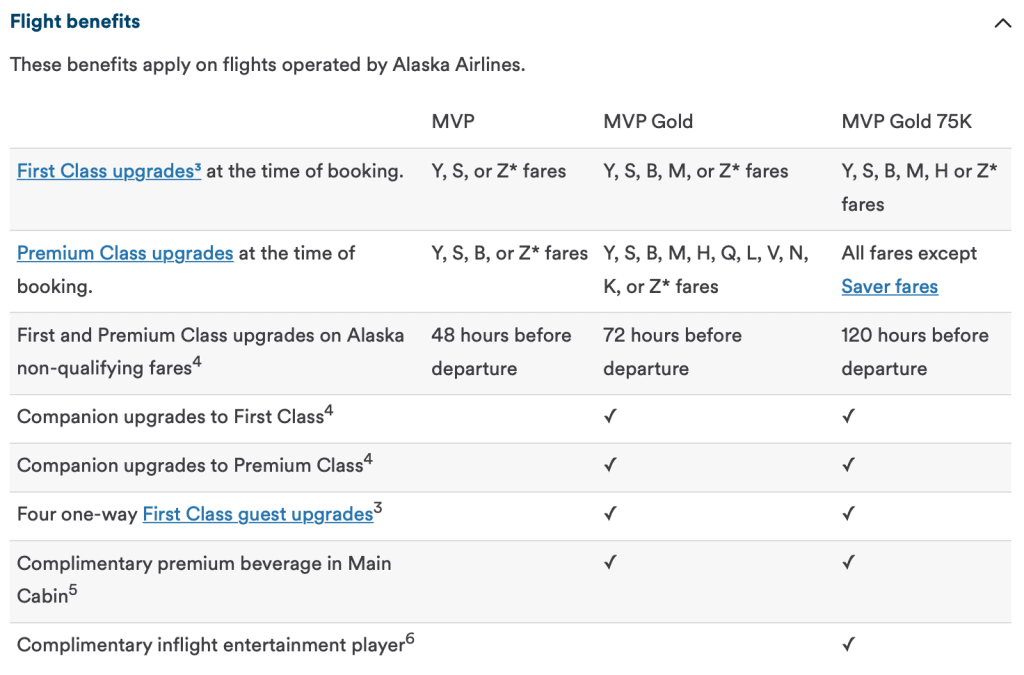 How will Alaska’s Elite Tiers Map to Oneworld?

Oneworld has Ruby, Sapphire, and Emerald tiers. Each Oneworld members tiers “map” to a Oneworld tier.

As an example, if you are an American Airlines elite member, you would map as follows:

With Sapphire level or above, you’ll get access on any Oneworld member airline to their lounges when flying internationally as well as extra baggage allowances.

You can see Oneworld benefits by status and airline here.

That said, there’s no airline in Oneworld where it’s easier to earn top tier status than on Alaska where you need just 75,000 miles. By comparison, on American Airlines, you’d need 100,000 Elite Qualifying miles AND you would have to spend $15,000 Elite Qualifying Dollars.

So, it has to be asked…. will Alaska raise their qualification thresholds when they join Oneworld?

I don’t see any scenario where this end of things is a positive for current Alaska elites.

For me, Alaska’s Mileage Plan is one of the absolute best in the world, both for how few miles some fantastic First and Business Class awards cost, for their own award availability, and for their generous routing rules like the stopover on one-way awards.

But once they join Oneworld, they will need a Oneworld award table and once can certainly foresee that being less generous than many of their current partner charts (which aren’t all spectacular, by the way – I wouldn’t use Alaska miles to fly Finnair or Singapore Airlines, for example, as those require more miles than you could spend on other airlines.)

Many of their current partners are already in Oneworld. Cathay Pacific, JAL, Qantas, Finnair, British Airways, and American Airlines all are in Oneworld (LATAM just left to link up with Delta).

It’s likely that a new Oneworld table incorporates all of these partners- potentially at a higher cost than today.

Alaska’s footprint for redemptions is small in comparison to an entire alliance. This will open Alaska’s Mileage Plan members up to a large range of new redemption possibilities – albeit perhaps a the cost of a more expensive award table.

This will also now allow Alaska’s members to get reciprocal elite benefits (for instance, lounge access on international itineraries for Oneworld Emerald members).

And since late last year, there are quite a number of former American Airlines loyalists who had their accounts terminated, including some high spending Executive Platinums. This occurred when American Airlines decided that people that took advantage of a loophole wherein they could open multiple Citi AA credit cards using freely transferable mailer codes, that did not include any language about the offer only being available to those who hadn’t had a card in the last 24/48 months, in fact violated fictional after-the-fact terms and conditions (that were not in the mailers nor the applications) – leading to a lifetime ban from the AAdvantage program.

Those people, who may be hub captive to AA, have had to find alternative spots to credit to, like British Airways or Cathay Pacific, that may not be as useful in terms of elite status for those that don’t actually fly those airlines.

Now, these flyers will have a new North American home with Alaska Mileage Plan and be able to both earn miles when they have to fly American Airlines and also accrue miles that will (likely still) have a great redemption value.

All in all – this move into Oneworld will be full of positives for nearly everyone. More redemption possibilities, reciprocal benefits, and much more.

But there is likely to be some give when it all happens.

How do you feel about Alaska joining Oneworld?